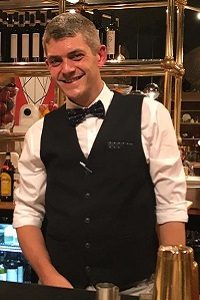 Merlin Griffiths is the instantly recognisable barman from C4’s First Dates.  He is usually the man tasked with warming the First Daters up and breaking the ice.  The King of Cocktails, Merlin has been a Bartender and Mixologist for more than 20 years and has worked all over the world.   When speaking Merlin shares some of the most hilarious anecdotes from the various series, along with some fabulous, entertaining and little known facts about the world’s most famous cocktails.  He is a cracking speaker who entertains, informs and everyone goes home wanting to knock up a cocktail. Merlin is also in high demand for Meet and Greets and providing corporate cocktail sessions. These are becoming increasingly popular as an alternative to pre dinner drinks.

To book Merlin Griffiths for your next event, contact us today.

Merlin Griffiths has worked around the world. And his somewhat eclectic list of jobs includes working in Soho cocktail bars to high volume restaurants, members clubs, nightclubs and corporate events. He spent three and a half year working in global marketing for Bacardi as Global Ambassador for Bombay Sapphire Gin. The role subsequently saw Merlin travel extensively across the world.

A walking encyclopaedia of anything to do with spirits and cocktails, Merlin has appeared in First Dates since series one in June 2013. It is a hugely popular TV show which continues to attracts millions of fans of all ages. Merlin also appears on ‘Saturday with James Martin’ creating cocktails for viewers to make at home.

Merlin met his partner Lucile at a cocktail competition more than a decade ago in Canada. Initially Lucile and Merlin took over The Priory Tavern in 2010. They took influences from classic British pub food and their time working in Canada and America. Consequently, the couple’s pub won Regional Cellar Keeper of the Year in 2015. Their current business is called The Malsters and sits on Badby Villlage Green. Merlin and Lucile have just spent the last six months renovating it into a really super and charming pub and restaurant. They have one daughter.

Merlin is a keen cyclist.