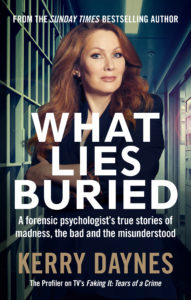 Furthermore, her next book is called What Lies Buried and is about a forensic psychologist’s true stories of madness, the bad and the misunderstood.

Following the success of Kerry Daynes’s first book The Dark Side of the Mind, Endeavour (part of the Octopus Publishing Group) which has sold over 70,000 copies will be publishing Kerry’s much-anticipated second book called What Lies Buried.

Kerry Daynes opens up the case files of some of her most perplexing clients to uncover what lies buried behind some of the most extreme and strange behaviour.

Whether she is dealing with a young murderer who says he has heard voices telling him to kill, a teacher who daubs children in red paint, or an aspiring serial killer who faints at the sight of blood, Kerry’s quest is to delve beyond the classic question asked of her profession: ‘Are they mad or are they bad?’

In her new book, Kerry provides an unflinching, enlightening and provocative insight into the minds of her clients. She challenges our notions about who, and what, is dangerous.

Kerry Daynes is a registered Consultant Forensic Psychologist with over twenty-five years of frontline experience. She has often acted as a trusted advisor to the British government regarding the safe management of high-risk individuals, She also acts as a psychological specialist in major police investigations.

Furthermore, Kerry is the go-to expert the TV networks turn to for expert commentary.  She is also a patron of the National Centre for Domestic Violence and Talking2Minds. Highly respected in her field, she is ‘The Profiler’ in the award-nominated TV series Faking It: Tears of a Crime (Discovery). 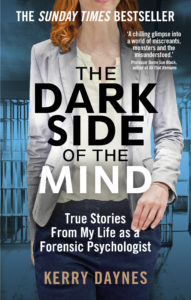 Kerry’s first book The Dark Side of the Mind received widespread praise. Professor Dame Sue Black called it ‘enthralling and terrifying’ and Harriet Tyce described her work as ‘timely and gripping’.

Dramatisation rights were sold in a hotly contested auction and translation rights have been sold in 7 countries.

Claudia Connal said of the acquisition: ‘We are thrilled to be working with Kerry again. What Lies Buried will have all the key ingredients that made readers fall in love with The Dark Side of the Mind. It has edge-of-the-seat gripping stories, intriguing characters. It also has Kerry’s trademark sense of humour paired with her wise analysis of the human condition.’

Kerry Daynes commented: ‘I am grateful to be able to tell more stories that shine a light on the real, often surprising nature, of the people I work with. I hope that they show that there is truth and hope to be found even in the darkest of places.’

If you enjoyed The Dark Side of the Mind, Unnatural Causes and The Prison Doctor, you will be captivated by What Lies Buried.

What Lies Buried: A forensic psychologist’s true stories of madness, the bad and the misunderstood will be published as a paperback original on the 19th of August at £8.99 with a simultaneous ebook and audiobook.