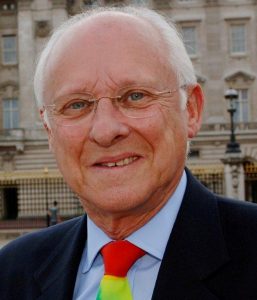 Outstanding Royal Expert and fascinating speaker Dickie Arbiter LVO recently took part in the first of many interviews he has been booked for in the run up to Prince Harry and Megan Markle’s forthcoming wedding.  In this particular interview with the USA’s CNN  Dickie was asked about all aspects of Prince Harry’s life.  Dickie who worked for HM Queen Elizabeth ll from 1988 to 2000 and who was seconded to Charles and Diana during that time was asked about Prince Harry’s childhood.  What was the Prince like when he was growing up, what kind of upbringing did he have and the role of his parents, particularly in what they gave him ie: Diana gave the High Street while Charles encourage them to appreciate the countryside and the environment.  Dickie was also asked how Prince Harry coped when his parent’s split and subsequently divorced, and how he dealt with the death of his mother. CNN were particularly interested in Dickie’s take on what role Prince Harry’s wife to be Meghan will play, what will she have to give up,  what help will she get from the Royal family and will she be able to cope.