The Baroness Morgan of Cotes 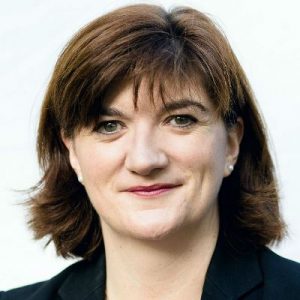 The Rt Hon the Baroness Morgan of Cotes (Nicky Morgan) is  the former Secretary of State for Digital, Culture, Media and Sport serving in Prime Minister Boris Johnson’s Cabinet. She stepped down as  the Member of Parliament for Loughborough in the December 2019 Election. A popular media contributor she is also in much demand for her impressive and knowledgeable keynote speeches.

The Rt Hon the Baroness Morgan of Cotes, Nicky Morgan, served as Secretary of State for Digital, Sports, Media and Culture under Prime Minister Boris Johnson until Feb 13th 2020.  While she was there Nicky oversaw the Government’s next steps on how social media platforms should be regulated, the rollout of faster broadband and 5G across the country. She also oversaw the Government’s digital strategy as well as having responsibility for policy on culture, media and sport.

Previously she had served as a senior Cabinet Minister under David Cameron in both of his governments, responsible for Education, Women and Equalities.  She also worked alongside George Osborne at the Treasury. Her roles included Economic, then Financial Secretary dealing with the European Union economic ministers, 2012 Autumn Statement, and 2013 Budget. Between July 2017 to July 2019 Nicky chaired the House of Commons Treasury Select Committee. This is widely regarded as the most influential parliamentary Committee.

As Secretary of State for Education, and Minister for Women and Equalities, she oversaw the publication of the 2016 Education White Paper, Educational Excellence Everywhere.  She also led negotiations for the Department’s 2015 Spending Review settlement and 2015 and 2016 Budget allocations. At over £50 billion per annum, this was one of the government’s largest.

Nicky championed schools becoming academies and curriculum reforms which ensured young people are prepared for the world of work. She also supported the setting up of the Careers & Enterprise Company and the first Department for Education Character Awards. Moreover ensuring specific ministerial responsibility, within education, for children’s mental health was also a priority.

Furthermore Nicky led the  Government Equalities Office on the introduction of the gender pay gap regulations. She is passionate about getting more women on the boards of listed companies.  She also led policies to address transphobic, biphobic and homophobic bullying in schools.

Prior to this Nicky was a Government Whip in the Coalition Government. She worked with Lib Dem colleagues to ensure the Government got its legislation through the House of Commons.  At the start of the 2010 Parliament she was elected by her peers to be a member of the Business, Innovation and Skills Select Committee. This was before being appointed Parliamentary Private Secretary for the Universities Minister.

In 2012 Nicky led a ground-breaking general debate in 2012 on mental health in the House of Commons. In her constituency she has worked with a group of volunteers to set up the Loughborough Wellbeing Café Project.

Originally elected as the Member of Parliament for the Loughborough constituency in 2010 she was re-elected in 2015 and 2017.

She studied Law at Oxford University and spent 16 years as a solicitor in the City of London, mainly working in corporate finance and mergers and acquisitions. She trained at Theodore Goddard, spent almost 5 years at Allen & Overy and then worked as a professional support lawyer at Travers Smith.

Nicky is the author of, ‘Taught Not Caught’ which published by John Catt Educational in 2017.

Nicky and her husband have one son, but when she isn’t with them, or working, she enjoys nothing more than a nice, long, run and completed the London Marathon in 2013 – pipped to the post by Ed Balls by only 13 seconds!

Nicky is available for speaking engagements.

TV
Question Time – BBC 1
Preston – ITV1
Daily Politics Show – BBC 1
Have I Got News For You.