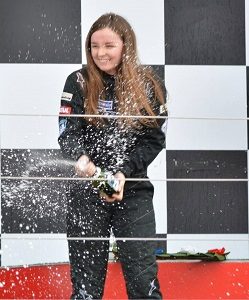 Racing driver Shanel Drewe is a force to be reckoned with. An impressive and hugely inspirational speaker, she has been forging a career in the male dominated motorsport world since she was 14 years.  Shanel started out, just a few percent of racing licenses were actually held by females and she is determined to help break down this equality barrier.

Starting out at aged 13 she volunteered her free time helping motorsport teams at racing events. At 16 Shanel became Vice Champion in the Adult Michelin Clio Road Class Championship. She equalled the championship record for most podiums in a season, and completed the most overtakes of anyone on the grid across the season.

Now 19 her company is going great guns. Furthermore, she is a regular instructor at Thruxton Race Track alongside the likes of Tiff Needell. And she is currently embarking as a performance driver for Mercedes Benz, as well as building her reputation up with some of the country’s leading experience day Super Car organisations.

Shanel is also competing in the Mini Challenge in 2021.  She has also beenbeen appointed as the first brand ambassador for the Community Driving School.  CDS are the UK’s only non-profit driving school who are currently expanding across the UK

Shanel Drewe is going places.  And it is not surprising considering her first words were Ford or BMW.  Obsessed with anything to do with cars. She asked that her Christmas and birthday presents be toy cars, garages and Scalextric sets

However, it was a chance provided by her favourite teacher that helped her passion turn into reality.  The teacher’s brother was competing in a national motor racing championship and Shanel was invited to go and watch him.

That day only fuelled her passion and within months she was being driven around the country by her dad so could volunteer with a number of Saloon Car and Single Seat race teams, spending long days every weekend travelling with her father across the country, doing anything from washing wheels, helping with repairs through to pit lane support.

For her 15th birthday her parents organised for her to drive on a race track by herself.  There was no stopping her now.  By the end of the session, Shanel was actually beating lap times of more experienced adult drivers, Netter still her instructor recommended it might not be a loss if she joined an official Junior Saloon Car Racing Championship.

Shanel’s father realise something had to be done but also recognised as a family they didn’t have the money to meet the costs a motor racing dream would cost.  But he had an idea and sold his car buying a a junior saloon racing car so his daughter could go racing.

Neither had any experience not the money to fund the season but Shanel had a wise head on such young shoulders.  Post homework she would promote herself to businesses and company executives.  And she generated enough money for eight races that first season despite having the least money and experience.

Demonstrating an incredible ability to race Shanel managed to find support to step up at just sixteen years old to race in an adult championship. She was the youngest and only female on the grid.  Shanel finish as Vice Champion in the Michelin Clio Championship Road Class, with a single point separating her from first place. She also won the Bristol Young Sports Personality of the Year and achieved Runner up in the Henry Surtees teen racer of the year award.

Her achievements kept on coming with her equalling the championship record of the most podiums in a season. She also completed the most overtakes of anyone on the grid.

Continuing to make headway Shanel’s first win was at a major event at Donnington. Conditions were terrible, it was extremely wet. Nevertheless she went on to win by over 17 seconds, despite having never driven in the wet before.

Sadly, along with her successes came her first encounters with sexism on a pretty huge scale. Her main rival was a much older and an experienced racer who certainly didn’t like a young female threatening his championship. Nor did he like her becoming a dominating part to the grid. As a result, Shanel had to quickly become experienced at handling such challenges.

At aged 18, Shanel set up her own company, Shanel Drewe Racing, and was the youngest female at the time to obtain her ARDS Professional racing instructors’ licence to help others the way she was helped to learn the dynamics of car control.

However, being a woman in a man’s world, the challenges are never far away. Unbelievably on her very first day instructing as part of her new company, Shanel had to make the difficult decision of reporting a customer to the police. The customer had thought it was OK to act inappropriately just because she was a young female.

She also encounters many customers who think they know better than a female.  Thankfully this has not put her off. Far from it.  It has made her ore determined than ever and she has become a powerful and experienced communicator.

What the future holds

A strong minded and powerful young woman, Shanel personally puts a huge amount of work into seeking the vital sponsorship she requires to continue her racing.   She takes every day at work as a small step to transforming the views of women in the sport. And her favourite part of the day is when jumps into the driving seat to show her male pupil how it’s really done!

Shanel has built her company up, is a regular instructor at Thruxton Race Track alongside the likes of Tiff Needell, is currently embarking as a performance driver for Mercedes Benz, and works with some of the country’s leading experience day Super Car organisations.

Never one to shy from a challenge Shanel has been filmed by the BBC. She had to take on an Ice driving course just an hour or so away from the Artic Circle in Sweden. She has also appeared on BBC Breakfast TV.