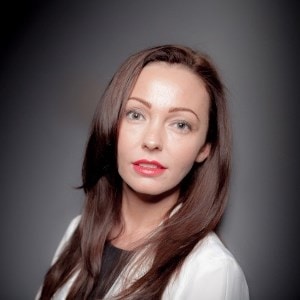 Sammy Woodhouse is a child abuse survivor and the woman who bravely waivered her anonymity to expose the biggest child abuse scandal in British History.  Author of ‘Just a Child’ (published April 2018) , she is a much in demand public speaker, trainer, campaigner & fundraiser who appears regularly on Loose Women and many other media outlets.

Rotherham born Sammy Woodhouse was a gregarious and happy, determined child with lots of friends.  She performed well academically and from the age of 4-12 she loved to dance and she regularly appeared in shows and competitions.   She thought she had her future mapped out.   She was going to become the world’s greatest dancer.  But she was just a child.Unfortunately when she was 12 yrs old, her dancing ended along with her dreams and with nothing to do outside of school she started to hang around the streets with her friends.

In 1999, when she was just 14th birthday, she met Arshid Hussain. An encounter that would change her life forever! She fell in love with Arshid and thought he loved her too.  Unbelievable he was already known to the authorities for being the leader of a paedophile ring.  But the police didn’t do anything about it or him. He abused her mentally, sexually and physically for years. He made her pregnant at the age of 14 and 15 – she gave birth to his child in 2001. He also groomed her to commit crime too. Astonishingly the police still refused to act and the abuse continued.

Sammy Woodhouse went missing from home and played truant from school for days, weeks and even months at a time.  Her parents placed her into care thinking she would be safe from him.   But no the abuse continued and astonishingly the authorities told him he had to collect her from the top of the street and had to arrive back to the care home for 10pm.  He was even allowed to attend appointments with her and go on holiday with her and her foster carer.

Sammy and her family were also on the receiving end of Arshid’s violence.  On one occasion he hung her over a balcony while she was with her son who was just a few months old.  He drove through two parked cars and into a church with Sammy in the car, dragged her to the edge of a hill and threatened to throw her off, set her flat on fire whilst her and her son were inside, put a gun to her head, assaulted her father and wrecked her mum’s car.  He stalked her for 24 hours a day. At just 16yrs old she had to move away and cut off all contact with everyone she knew so he couldn’t find her. Suffering from major depression she tried to kill herself on numerous occasions

Sammy Woodhouse left school with no qualifications, a criminal record and incredibly low self-esteem. At 18 she became a model and a lap-dancer. She though she was taking back control and she wrongly believed by doing this she was empowered but she wasn’t. She has simply entered a dark and seedy world. She was frequently reminded that being sexually assaulted which happened to her so many times, “was part of the job”. She witness drug dealing, money laundering, fraud, trafficking, prostitution and how badly all the women were treated.

Fast forward to 2013 when she was 27.   Sammy contacted The Times newspaper. Her story was published in August 2013, triggering the now world renowned ‘Professor Alexis Jay report’, proving 1,400 children was abused and failed in her home town of Rotherham between 1997-2103. Sammy was also the first survivor to disclose her abuse to South Yorkshire police who re opened every child abuse case in South Yorkshire which in turn exposed the biggest child abuse scandal in Great Britain. In February 2016, her abuser was found guilty and sentenced to 35 years in prison along with dozens more.

For Sammy her life started on the day her abuser went to prison and she made a decision to use her own experience to help others.

Since she started campaigning Sammy has had significant media attention, raising awareness on a worldwide scale and is now considered a national spokesperson and advocate for Child Sexual Exploitation and surrounding fields. She has received thousands of media offers, her interviews include New York & London Times, Guardian, BBC, SKY news, channel 4 & 5 news, Loose Women, GMB, Closer, Marie Claire, Grazia, New magazine and she appears regularly on Loose Women, This Morning and many leading daytime TV shows.

Sammy has met privately and works with professionals around the UK to help change policies and legislation. Sammy helped change policies in regards to licensing in 2014 at Rotherham MBC and continues to do so at national level. She also met with DfE to ensure all children will learn about healthy and safe relationships in schools, which will come into effect soon. She has also had private meetings with then PM David Cameron, Victims Commissioner, Ministry of Justice and the Home Office as well as other government officials, and she secured £3.1 million to Barnardo’s as well as raising funds for other local charities.

Sammy is profoundly passionate about sharing her experiences to help educate children and adults about Child Sexual Exploitation. She is also a much in demand trainer and speaker, speaking at events and conferences in the UK, Scotland, Wales, Jersey and Northern Ireland.  Her campaigns so far includes – counseling services, mandatory education, CICA, Sammy’s Law, licensing, employment changes, legal action against councils, Loose Women’s never too late to tell campaign, court system and training for all professionals.

“Samantha Woodhouse is a woman of outstanding resilience. Her story of exploitation in Rotherham itself is truly shocking. The hardship she has been forced to endure since breaking away from her abusers would have destroyed most of us mere mortals. She has not only survived but has found superhuman strength to negotiate her way through this whole confusing experience. She was instrumental in securing major convictions of a gang of paedophile exploiters in 2016. To top it all, as “Jessica”, she educated the nation through her press engagement during the breaking of the Rotherham scandal and continues to bring in depth understanding of CSE to us all”.
David Greenwood – Child Abuse Lawyer

We created a training film for the NHS to help staff identify victims of CSE.  We felt that helping the viewer understand the realities of being a victim of CSE would provide compelling testimony to reinforce the messaging throughout the film.  We were incredibly grateful to Sammy for agreeing to take part.  Hers was a truly shocking experience which is sadly all too typical in CSE cases.  At the time, she asked for her identity to be protected – a right she has subsequently waived.  We spent a few hours interviewing Sammy who shared her experience with humbling honesty.  She is able to articulate the full horror of her experience in a highly articulate way that engenders a desire for action rather than sympathy alone.   It’s clear to us that she wants others to learn lessons from her experience in the hope that she can help protect other potential victims.”

I have known Sammy Woodhouse aka ‘Jessica’ for over two years now. Sammy is the survivor whose story ultimately led to Professor Jay’s Inquiry into CSE in Rotherham which, in August 2014, reported that a conservative estimate of 1400 girls had been abused in Rotherham over a 16 year period. In 2016 I witnessed first-hand Sammy’s bravery, as she endured a harrowing trial in court, which concluded with her abuser being sentenced to 35 years in prison. This trial set the tone for a remarkable response in Rotherham which, between February 2016 and May 2017, has seen 26 criminals convicted of sex crimes against children who are now serving a total of 360 years behind bars. Sammy has worked with the local authority to attract new funding of £3.1m into Rotherham, which enabled the development of a new provision run by Barnardo’s to reduce the numbers of children who are vulnerable to CSE. I have also had the privilege of hearing Sammy speak about her ordeal, both as a child victim and now a survivor who has made a commitment to ensuring that awareness of the grooming process is heightened to reduce the risk of others being ensnared by the evil that is CSE. Sammy speaks with passion and anyone listening cannot help but reflect on their practice and make changes for the better.