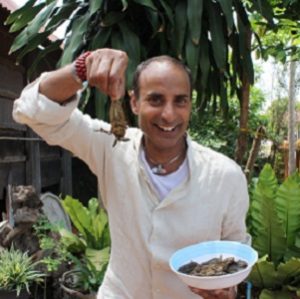 Reza Mahammad is known as the Prince of Spice. A highly entertaining and flamboyant TV chef, he has an encyclopedic knowledge of Indian food. A talented self taught chef Reza combines Indian and Western flavours to stunning effect.  A consummate professional, he is a TV presenter, speaker and Cunard Lecturer.  He is also in huge demand for private chef commissions.

Aside from his first love of cooking he is passionate about history, the arts, culture and opera.

Reza was born in the UK  and educated at St Peter’s School in Panchgani Nr Bombay. Freddie Mercury has attended the same school ten years earlier.

His father had established The Star of India restaurant in London in 1955, turning it into one of London’s most famous Indian eateries. It soon became a magnet for the rich and famous.   Reza took over in the early Eighties, transforming it from what had sadly become a bog-standard curry house to something very special for many years. Reza and his family sold the restaurant in September 2018. This saw the end of a bygone era.  The British Curry Awards awarded Reza the special recognition award in 2015 for his contribution to the UK curry industry.

The Prince of Spice cut his TV teeth on Flavours of India in 1993/4 and  was co-presenter with Sanjeev Bhaskar on Delhi Belly in 2001 for UKTV.  The much talked-about series is still being repeated on air to this day and has lost none of its popularity.

In 2002 Reza was an inegral character in the brilliant A Place in France in Channel 4.  So successful, it ran for three series. His relationship with UKTV resumed with Coconut Coast in 2003 and was followed by United States of Reza in 2004.

Impressively he has a wealth of experience on the food festival circuit. He appears regularly at The Good Food and Wine Shows Durban, Cape Town, Jo’burg and Kuwait Food Festival. He also demonstrates dishes at the The Taste of Dubai, the Taste of Abu Dhabi, Leicester Food Festival, Russia Food Festival as well as BBC Good Food Shows.

A fine raconteur Reza peppers his wonderful TV travel anecdotes with historical stories.  Reza delivers hugely popular lectures on board Cunard and P&O cruise liners. He is the author of Reza’s Indian Spice and Rice, Spice and all Things Nice