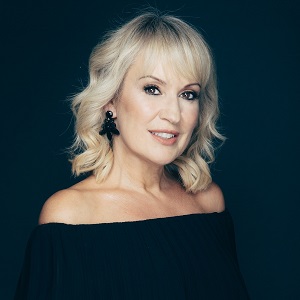 We represent Nicki for Cruise lecturing and with a long standing relationship with Nicki we deal directly with her for speaking and hosting.

Nicki Chapman is now best known for presenting such programmes as the BBC’s Wanted Down Under and Escape to the Country.  She is also the person Radio 2  turns to to stands in for Zoe Ball on BBC Radio2’s Breakfast Show and Sarah Cox’s Drive Time.  In addition she covers for Vanessa, Claudia Winkleman, Paul O’Grady and Lisa Tarbuck.

Instantly recognisable and hugely likeable, Nicki’s is in constant demand as a TV presenter and radio host.  A gifted speaker and highly skilled event host, Nicki brings a real sparkle to every event.   And she is an event booker’s dream speaker and host.

It is true.  Nicki is every event booker’s dream speaker and host.  Still heralded as one of the music business’s best known PR’s Nicki worked with  Bowie, Take That and The Spice Girls. Hugely talented and professional, Nicki brings a sparkle to every event she speaks at or hosts.  Awards presenting, event hosting, interviewing or speaking, Nicki is uplifting, entertaining and informative.   Working incredibly hard to ensure the event is a huge success, she is massively popular with clients.

Above all Nicki is instantly recognisable. This is because she is a regular presenter on Wanted Down Under and Escape to the Country on the BBC.  And an absolute audience favorite presenter at RHS Chelsea Flower Show too.  Furthermore Nicki presents The Great Gardening Challenge on C5.

Her track record is impressive.  Previous shows include The Morning Show, Sunday Style, Castle in the Country, BBC Breakfast News on location, Holiday, Holiday 10 Best and Holiday’s at Home.  For Sky1 Nicki was involved in Made in LA as well as for ITV1 Soapstar Superchef and Best Ever Worst Auditions.

Nicki and ‘Nasty’ Nigel Lythgoe danced together as ‘Fred & Ginger’ in 2001 on BBC1’s Children In Need. Similarly Nicki was one of  12 celebrities who took part in BBC1’s Sport Relief show jumping programme Only Fools on Horses. She came 2nd.

She was Christopher Biggins partner on on Let’s Dance for Comic Relief. Subsequently Nicki joined her fellow ex-Pop Idol judges Pete Waterman and Neil Fox on Peter Kay’s Britain’s Got The Pop Factor … And Possibly A New Celebrity.  2009 saw her as a judge on Disney Channels Hannah-Oke along with Disney’s Brad Kavanagh and Dancing on Ice judge Jason Gardiner.  She is on the steering committee for Sport Relief and has travelled to Uganda and Ghana for the charity.

Nicki was born in Canterbury, Kent and spent her childhood with her parents and sister by the sea in Herne Bay. She left school at 16 and after spending three years at the local college, she spent eight months in Australia.  She only returned to the UK to organise emigrating to Oz. However, whilst waiting for her visa, the lure of London and the music industry beckoned, changing her path forever.

At 21, Nicki worked her way up in the music industry starting off as a Promotions’ Assistant at MCA Records.Consequently she became one of the youngest publicists in the industry. She then moved to RCA Records as Head of TV Promotions where she began a long association with Simon Cowell.

From 1995 until the end of 2000 she was a joint partner in Brilliant! PR. The company represented the Spice Girls, Annie Lennox, Take That, Phil Collins, David Bowie, Van Morrison and Amy Winehouse.  Other clients included the BRIT Awards and the Big Breakfast.

It was during this time Nicki was approached by ITV to judge a brand new entertainment show called Popstars (2000). The winning band were called Hearsay and went on to sell over a million copies of their first single ‘Pure and Simple’.

Having met and worked with Simon Fuller in the nineties, Nicki joined his management company, 19 Entertainment in January 2001 as Creative Director.  She worked with acts including Annie Lennox, Will Young and S Club 7.  Nicki continued her role as judge on ITV/19’s Pop Idol, reuniting with Simon Cowell and alongside Pete Waterman and Dr Fox.

Nicki’s interests are ‘car booties’ (guilty pleasure), the gym, movies, travelling and gardening. She has a passion for Elizabethan history and novels, and celebrity gossip.  She married Music Executive Dave Shackleton (Shacky) in July 1999 and they currently live in West London.

From leaving school at 16 and working my way up through the music industry, working alongside such acts as Take That, Robson & Jerome, the Spice Girls, Kylie, David Bowie, Phil Collins, Annie Lennox, Van Morrison with accompanying anecdotes.

From my first foray on the biggest TV show in the UK (Popstars and Pop Idol) to presenting for BBC Breakfast News, Wanted Down Under, Escape to the Country, the RHS Chelsea Flower Show, Sky News and BBC Radio 2…

“We were so impressed with Nick when she joined us to help officially launch the new show homes at one of our luxury retirement village developments recently. Not only was Nicki engaging, kind and interested with all the visitors and staff at our event, but she was also genuinely interested in the details about our properties and our offer. It certainly wasn’t a superficial interest, she really wanted to understand what we were about and it was a joy to hear her chatting to our visitors later on about the appeal and benefits of our properties. Nicki’s involvement definitely helped contribute to making our launch a great success.”
Iwan Jones, managing director, Renaissance Villages

“Nicki was superb at a recent launch event we managed for our property client. She arrived well briefed and completely looked the part – definitely adding the glamour of a TV presenter to our event. Nicki also spent a lot of time getting to know more about our client, and when speaking to event visitors was impressively ‘on message’ for us whilst still coming across in a very natural and accessible manner. It was lovely to see how our event visitors were already so fond of Nicki from seeing her TV shows, they really did warm to her and she did a great job making them feel a bit special at our event.”
Gill Vosper, account director, Absolute PR and Marketing