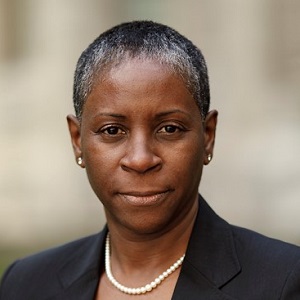 I. Stephanie Boyce is a trail blazer who grew up with big dreams. She refused to be defined by the labels  others chose to attach to her.  Filled with determination and demonstrating impressive resilience, and strength she went from a council estate to become one of the most influential leaders of our times.    Serving as the first president of colour of the Law Society of England and Wales from March 2021 to October 2022 she was their longest serving president.

Stephanie is a multi award winning, highly experienced, approachable and inspiring adaptable leader. Furthermore she is a  strategic thinker and influencer delivering measurable and sustainable results. She also contributes to the world’s media on a regular basis and is in huge demand as a keynote speaker.

Stephanie doesn’t see giving up as an option. She was told she would never make it as a solicitor. That only inspired her to not only become one but to aim to become the president of the United Kingdom’s largest body of solicitors. It took her four attempts but she did it and she led with intention and purpose through a number of world crises including the Covid-19 pandemic, the withdrawal in Afghanistan, the war in Ukraine and the death of Her Majesty the Queen.

Stephanie was admitted as a solicitor in 2002 and holds a Master of Laws in public law and global governance from King’s College London and is a Fellow of the Chartered Governance Institute.

A member of the HM Treasury and the Department for Business, Energy and Industrial Strategy (BEIS) commissioned – independent taskforce to boost socio-economic diversity at senior levels in UK financial and professional services. Stephanie is also a member of Thomson Reuters Transforming Women’s Leadership in the Law Advisory Board. She also sits as a Commissioner on the National Preparedness Commission to promote better preparedness for a major crisis or incident and the Shinkwin Commission looking at how business can harness diverse talent for success.

In 2020 Stephanie was voted on to the Governance Hot 100 – Board Influencer and made the Power List 100 Most Influential Black People in the UK in 2021, 2022 and 2023 and jointly awarded the 2022 Burberry British Diversity Awards-Inspirational Role Model of the Year.

Stephanie is an Honorary Professor of Law, The Dickson Poon School of Law, King’s College London. In addition she holds an Honorary Doctorates of Law from Keele University and the University of East London, and is the winner of the King’s College London Distinguished Alumni of the Year award 2022. Stephanie also received the High Sheriff of Buckinghamshire award for her leadership of the legal profession during the COVID-19 pandemic and services to equality, diversity and inclusion.

TV News channels such as BBC, ITV  & C4 seek Stephanie out for expert contributions and commentary on many subjects.  They include leadership, resilience, determination, ED&I,  Public legal education, the justice system, social justice, current affairs, social mobility.  In addition her keynote speeches motivate and inform,  and in particular her account of her  tenure as the first colour president of the Law Society of England and Wales after four attempts is truly inspiring.