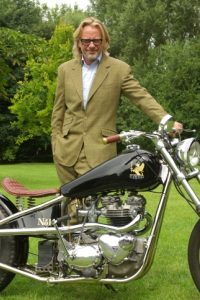 Bonkers about motorbikes and upcycling Henry Cole is instantly recognised around the world as the presenter of World’s Greatest Motorcycle Rides, The Motorbike Show, Shed and Buried, and Find It, Fix It, Flog It.  He has been presenting for over 20 years and has over 200 shows under his belt. He also makes his own programmes too.  Henry has had a hugely varied, eclectic and sometimes controversial career. An old Etonian he was also a heroin addict from the age of 19 – 25 but managed to kick the habit and has been a war Cameraman, a session drummer, a movie maker and has directed countless pop promos, on the road documentaries and ‘live in concert’ shows specializing in Rock for bands like Guns and Roses, AC/DC Aerosmith and Michael Jackson.  He is also the founder and owner of Gladstone Motorcycles.   Henry Cole is a fascinating and mesmerising speaker. He intertwines the highs and lows of his life experiences with his impressive business acumen and his speeches are truly memorable.

Henry Cole was educated at Eton and has gone on to forge a career spanning some 32 years in the TV and movie industry.  The owner of a production company HCA Entertainment, Henry is currently best known worldwide as a TV Presenter immersing himself in his lifelong passion for motorcycles and the tinkering and restoring of vintage machinery.  Currently he’s the presenter of World’s Greatest Motorcycle Rides: Travel Channel Worldwide, The Motorbike Show: ITV4 and Discovery Networks, Shed and Buried for ITV and Travel Channel Worldwide and The Motorbike Show Special: Steve McQueen’s Motorcycles.

Henry is also the boss of Gladstone Motorcycles, not named after Henry’s great-great Uncle, William Ewart Gladstone the Prime Minister but his great uncle Dick ‘Redbeard’ Gladstone, a true British eccentric who instigated Henry’s passion for classic British motorcycles at the tender age of eight! Gladstone Motorcycles manufactures the finest bespoke British custom motorcycles.  The world land speed record holder for a pre 1955 750cc motorcycle Henry rides every year for Brough Superior and Gladstone on the Bonneville Salt Flats to try and secure a whole load more!  He is very public about his battle with Heroin addiction between the ages of 19 and 24. He is now 28 years clean but still is heavily involved in trying to help other addicts and share his experience in battling addiction  Along with motorcycles Henry is passionate about fishing, classic tractors, cycling and most importantly his, wife Janie and his two sons Charlie and Tom!

“Henry can animate a room with his experience, credentials, humour and authenticity. He is a pure natural in communication able to talk to anyone and everyone. His own interest in people and their lives makes him a first class communicator.”
Gareth Williams – Scripps Networks

“Often drawing upon experiences from his fabulously colourful life thus far, Henry Cole makes for the perfect raconteur. Witty, engaging, open and honest, Henry never fails to hold his audience enthralled in whatever tale he is recounting.”
Fred Harris – The Speakers Agency

World’s Greatest Motorcycle Rides: Travel Channel Worldwide
Now filming the shows 17th and 18th series WGMR has been one of Travel Channel’s most popular and long running shows. Over the last 12 years the series has taken Henry and his motorcycle all over the world and back again and continues to do so!

The Motorbike Show: ITV4 and Discovery Networks
Now in its seventh season for ITV4 in the UK and Discovery Worldwide the series is a magazine type format allowing Henry to revel in all aspects of riding and restoring motorcycles

C4
Henry presents a regular daytime series for Channel Four called Find It, Fix It, Flog It where he makes money for homeowners who have discarded or abandoned all forms of machinery from bicycles to tractors, motorbikes to mowers.

The Motorbike Show Special: Steve McQueen’s Motorcycles
This two part special is dedicated to the ‘King of Cool’ Steve McQueen’s love of motorcycles. In the series Henry builds a replica of one of McQueen’s favourite bikes, talks to his son Chad, rides a selection of McQueen’s bikes and re-enacts the famous jump in ‘The Great Escape’.