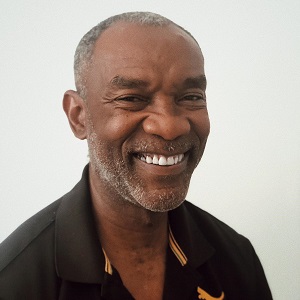 Dudley ‘Tal’ Stokes is hugely motivating.  Founder member of the Jamaica Bobsleigh Team, Tal has encountered numerous obstacles in his lifetime.  The team’s story featuring Dudley as the principle character, was immortalised in the film ‘Cool Runnings’. Considered an iconic film by many and with a massive fan base the team’s trainer was played by actor John Candy.

A four time Olympian Dudley went from what many regarded as an chancer to contender in only six years.  Moreover, Dudley continues to maintain the same optimum mental health and physical heath because he believes they are closely linked. Full of inspiring mantra’s  one  he feels strongly about is , “good physical health leads to good mental health”.

A man of many talents he is a respected orator on the subjects of Diversity and Inclusion. He is also a successful and serial entrepreneur.

So whatever topic he is asked to speak about, he shares his wealth of knowledge and experience in a direct, humble entertaining and easily understood way.

“Dudley was so personable and humble; he spoke with a real charm that resonated with a number of colleagues. He had some great nuggets of information and some great mantras that struck a chord (such as live a life that matters). He handled the Q&A very well as there were lots of questions asked of him (a sign of how engaging he was that people wanted to know more).”

One billion people on TV saw Dudley and his team crash out of the Olympic Games in 1988 in Calgary. A crash at 80 mph which resulted in their crash helmets dragging along the wall of the run for 2000ft.  Many will remember them walking alongside their sled to the onlookers applause.

For a person who had been a high flyer all his life the outcome was devastating. A graduate of the RMA Sandhurst and a Pilot in the elite Jamaica Defense Force Air Wing, Dudley was a serial winner. He had taken on the challenge of building the first Winter Sport Team from Jamaica and didn’t expect to fail. This hit him badly.  Little did he know at that point, that within six years the Jamaican Bobsleigh Team would be 10th in the world.  An incredibly achievement.

What’s more, the team had aroused such interest and excitement and their story went global. Unsuprisingly their story was turned into the massive blockbuster Disney feature length movie, ‘Cool Runnings’.

The crash hit Dudley in more ways than one

Dudley took the failure very personally and chose to dismiss the many mitigating circumstances. Spiraling into a period of depression and reflection, he deciding there was only one way to go. And that was to become a competitive Bobsleigh athlete. Adopting the mantra, ‘ to be ruthless, relentless, remorseful and resolute’ he undertook a deep analysis of where the team was and where they wanted to be. In addition what elements were required for success and what advantages they had.  The main obstacle was they were from a poor Caribbean nation. And to many they really had no business in Bobsleigh, the Olympics second most expensive sport. But they were there and they were there to stay.

So he focused on each individual, and how to maximise each members performance mentally and physically.  Similarly, he applied the same determined focus on the acquisition of resources to limit the capital required to finance the team’s training etc.

After six years and two more Olympic Games, The Jamaica Bobsleigh Team were 14th sled (the top seed is 15 sleds) overall in Lillehammer Norway, 1994. They were the 7th nation, and ahead of all-American Sleds.

Their budget that year was USD60,000 whilst the USA’s was USD 6 million.

Dudley has also been hugely successful in business. His first company was Helitours Jamaica was Jamaica’s first helicopter tour company. He built it to 20 employees in 12 years. They operated four helicopters flying from three bases offering tours, charters, medevac, traffic control, and search and rescue.

He also speaks about all aspects of logistics, small project management and team building.

His speeches are heard by audiences all around the world.