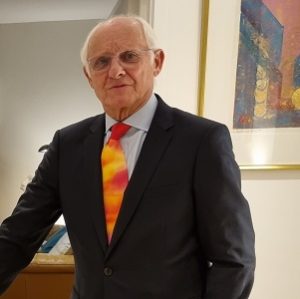 Royal expert Dickie Arbiter is best known for being the most in demand of all the former press secretaries to HM The Queen. Subsequently he is the man the world’s press always call upon for first class and expert Royal opinion.

Dickie’s experience of working closely with HM The Queen and other leading Royals. Consequently he is undeniably the only Royal commentator  to have such unique knowledge. And for whatever the reason including weddings, deaths, births, celebrations, overseas visits, scandals, incidents and general interest stories.

At the Palace from 1988 to 2000 Dickie was also responsible for organising the media coverage for Princess Diana’s funeral. He retired from the Palace in 2000.

He is a global broadcaster and journalist with over fifty years experience. These years have been spent covering royalty, heads of state and other globally recognised personalities.  Furthermore  Dickie is an outstanding speaker, lecturer and media trainer.

Dickie is a former Press Secretary to Queen Elizabeth II. Furthermore he is a former media manager for Prince Charles and the late Princess Diana

As a result Dickie Arbiter has had unprecedented access to some of the most notable figures of our time. He also has ober  five decades of experience covering royalty as a broadcaster, journalist and Royal Press Secretary. Therefore he is regarded as one of the most knowledgeable and sought-after experts on the British Monarchy working today.  He is also the only Royal Commentator who has witnessed both the coronation of Queen Elizabeth II and her Diamond Jubilee.

In addition to his duties as a royal spokesman, Dickie was responsible for media managing ceremonial occasions.  Likewise all major state events inside Buckingham Palace and Windsor Castle and The Queen’s major UK engagements too. Responsible for all operational media requirements for royal funerals, he was at the helm for that of the late Diana, Princess of Wales. This incredible experience allows him to bring his own personal insight into the public forum as a royal analyst, historian and as an international lecturer.

Dickie retired from Buckingham Palace in 2000.  Hence he is now the person the world’s press turn. After all he has spent over fifty years covering royalty, heads of state, and other globally recognized figures.

There have been kings and queens in the UK for over a thousand years, and despite quirks of nature and accidents of birth, the join from one reign to the next has been almost seamless. There have also been scandals – some would call a constitutional crisis – but throughout the monarchy has survived. Dickie dips into the history of the monarchy from the Hanoverian Georges to the present day Elizabethan age and the scandals that ricked it.

The Palace and the Press

Love them or hate them the media have always targeted the soft underbelly of the monarchy. No one in the family is excluded by them and in his talk Dickie highlights some of the highs and the lows the Royal family have had to endure, including The Queen, Prince Charles and Camilla, William and Catherine, Harry and Meghan, Andrew and Fergie and Edward and Sophie – none of them have escaped analysis under the media microscope.

The Relevance of Monarchy

The Queen’s critics argue there is no place in the 21st century for a monarchy. The Queen, and that means the monarchy, stands accused of being out of touch, rich and costing the taxpayer too much.  By today’s standards the Queen is way down in the rich list pecking order as published annually by The Sunday Times. Dickie explodes the ‘rich & cost’ myth and draws comparisons between the cost of The Queen and other notable heads of state.

Spotlight on the Monarchy

Not long after Queen Elizabeth II came to the throne in 1952 that she began to feel the full glare of the media spotlight. Television came of age with its coverage of her Coronation, since when neither TV nor photographers have left her, or other members of the royal family, alone. There was that BBC 1969 Royal Family documentary – shown four times since made and subsequently then locked away on orders from The Queen; Edward’s disastrous BBC Royal Knockout; Charles’ admission to adultery interview on ITV; Diana’s BBC Panorama interview; Andrew’s BBC Newsnight car crash interview and Harry and Meghan’s “their truth” confessional to Oprah Winfrey. Today Dickie sheds light on how TV and photographers combined could have destabilised the monarchy but instead damaged only the individual rather than the institution.

Globally he has contributed to all the leading daily and weekend newspapers, their magazines and monthlies.

On Duty with the Queen was published by Blink in Oct 2014.